An oldie but a goodie… 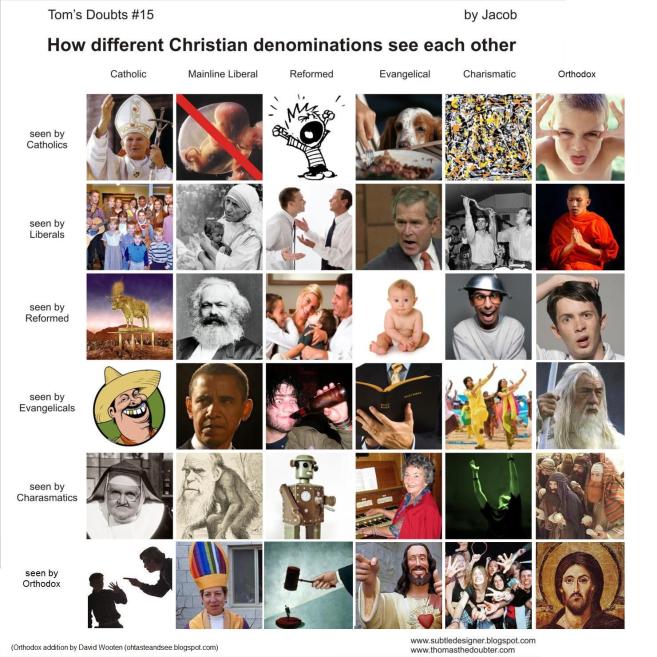 We often tend to have short memories, but many segments of the broader professing church have been slouching towards Sodom for many years.

Below is a sampling:

From 2010 – “Presbyterians continue to be divided over gays as leaders split on 2 gay-friendly measures.”

“I think we’re seeing acts of desperation by those who feel their way of life is slipping away,” the Rev. Ray Bagnuolo, the openly gay pastor of Janhus Presbyterian Church in New York City, said after the marriage vote. “Progress takes time. But to gay and lesbian people, it says their relationships, who they are, does not matter to this church. I don’t call that Christian or loving.” – Fox News

Therefore God gave them up in the lusts of their hearts to impurity, to the dishonoring of their bodies among themselves, because they exchanged the truth about God for a lie and worshiped and served the creature rather than the Creator, who is blessed forever! Amen. For this reason God gave them up to dishonorable passions. For their women exchanged natural relations for those that are contrary to nature; and the men likewise gave up natural relations with women and were consumed with passion for one another, men committing shameless acts with men and receiving in themselves the due penalty for their error. – Rom. 1:24-27

But as for the cowardly, the faithless, the detestable, as for murderers, the sexually immoral, sorcerers, idolaters, and all liars, their portion will be in the lake that burns with fire and sulfur, which is the second death.” – Rev. 21:8

“The church was not yet ready to make a decision,” said 219th General Assembly Moderator Cindy Bolbach during a press conference following adjournment. “This kind of thing happens at every assembly.”

While many people will see the vote simply as winning or losing — “that’s human nature,” the Moderator said — Bolbach said more helpful thinking involves “trying to figure out where God is leading the church. Women’s ordination took us years and years to decide.” – PC(USA) News & Announcements

The full Assembly seemed quite satisfied with the deliberation in the Ecumenical and Interfaith Relations Committee as members needed just one hour to move through its business, including the two interfaith papers of which they referred one and approved the other.

Brothers, my heart’s desire and prayer to God for them [the Jews] is that they may be saved. 2 For I bear them witness that they have a zeal for God, but not according to knowledge. 3For, being ignorant of the righteousness of God, and seeking to establish their own, they did not submit to God’s righteousness. 4For Christ is the end of the law for righteousness to everyone who believes. – Rom. 10:1-4

“Because thou sayest, I am rich, and increased with goods, and have need of nothing, and knowest not that thou art wretched, and miserable, and poor, and blind, and naked” – Rev. 3:17

Christ condemns the church at Laodicea for being lukewarm and self-deceived. The religious person thinks he is something when he’s not. Notice the contrast in verse 17 between “thou sayest” and “knowest not”: “Because thou sayest, I am rich, and increased with goods, and have need of nothing ….” Does that sound like the statement of a Christian? Not at all. That’s the statement of a religious hypocrite. Verse 17 then says, “… [thou] knowest not that thou art wretched, and miserable, and poor, and blind, and naked.” You say, “Couldn’t God have used just one of those words to cover the situation of the hypocrite?” That’s true, but He used them all to cover the scope of their lostness. – John MacArthur from “The Apostate Church”

Here’s an interesting and thought proking article from Reformation21.

The Rising of the Beast in America?

Job is the Biblical archetype of the patient, suffering saint. Like me you’ve probably heard people use the phrase, “He [or she] has the patience of Job!” Perhaps [like me] you’ve even used it yourself. But having studied Job at some length I’ve come to realize what a flippant, throw-away rimshot line that little cliché really is.

Let’s be honest, you and I have never met anyone with the patience of Job. Job’s patience truly is the stuff of legend. Here was a man who the Scriptures testify was “blameless and upright, and one who feared God and shunned evil” (1:1)—”none like him on the earth” (v.8).

Phil Johnson does a yeoman’s work in succinctly expositing Job and capturing the essence of the book in an amazing economy of words and ideas. Phil’s editorial skills shine as brightly here as I’ve ever seen them. Do yourself a big favor, and treat your spirit to this excellent article.

The Patience of Job – Living by Faith, Not Feelings

When interest in the churches begins to centre round the visual and the sensual it is commonly a sign of impending apostasy. By ‘sensual’ I mean that which appeals to the senses of man (sight, smell, hearing), as opposed to ‘spirit’, that is, the capacity that belongs to those born of the Spirit of God. Hence the antithesis, ‘sensual, having not the Spirit’ (Jude 19). ‘Sensual’ is also translated ‘natural’ or ‘worldly’; the meaning is the same. It does not take regeneration to give the sensual or the aesthetic a religious appeal to the natural man or woman.

In the Old Testament the people of God were in measure taught by their senses as God imposed the form of worship. As a check against any misuse of that means of teaching no additions to or subtractions from it were allowed. But with the finished work of Christ, and the coming of the Holy Spirit, a momentous change took place. The church was raised to the higher privilege of worship in ‘spirit and truth’ (John 4:24). She belongs to the ‘Jerusalem which is above’ (Gal. 4:26).

In the words of John Owen, ‘the naked simplicity of gospel institutions’ was established in the place of ‘the old, glorious worship of the temple’; Levitical choirs, incense, vestments, etc. — all were gone. Yet not gone permanently; for as church and world gradually came together in the rise of the Papacy, worship that appealed to the senses was reintroduced. Presuming on Old Testament practice, what the gospel had ended in the apostolic age was restored, and the difference brought in by Pentecost disappeared.1 Instead there developed a form of worship in Roman Catholicism which made impressions on the senses at the natural level and which did not need the Holy Spirit.

END_OF_DOCUMENT_TOKEN_TO_BE_REPLACED

How can I be free from the wrath of God?

The answer to the most important question you can ever ask is found here.

A Walk Down Memory Lane

Absolute Dominion
Create a free website or blog at WordPress.com.